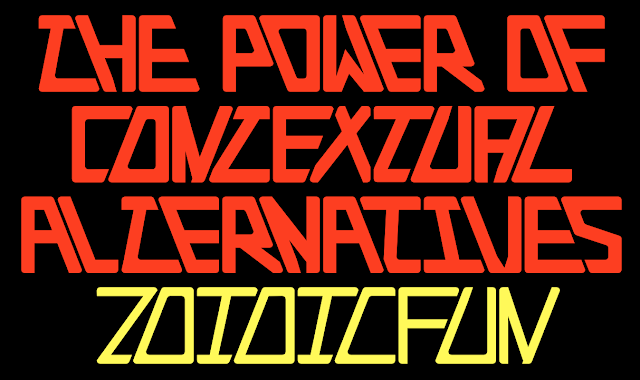 ZoidicFun has five weights and two orientations. An italics version of each weight is formed by flipping the templates over a vertical line. In the picture above, the second and fourth lines are italic styles.

ZoidicFun is hard to read and very tightly spaced to accentuate the way the letters tile together. The letters are monospaced, which makes the pattern of trapezoids more obvious. Notice that pairs of letters form rectangles. All of these attributes make the typeface stand out and command attention. It is useless for text but can be useful for when a short bit of text needs to draw attention, as in titles or advertising. It is available from fontspring.

Posted by Dessert Survivor at 1:07 PM No comments:

Ovaltown is a strange, bizarre typeface family in which the letters are derived from  ovals. It is unicase, but some of the letters on the lower-case keys have different shapes than their counterpart on the upper-case keys. It has limited uses and is too hard to read to be used as text. 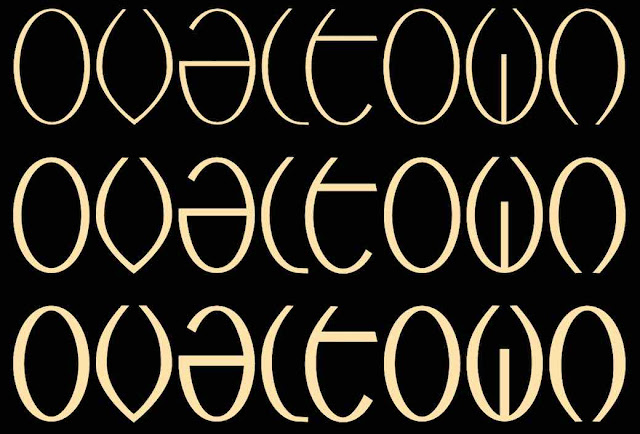 The family has three weights and is available from Fontspring and MyFonts.

A family recently expanded with new weights and italics is Hermainita (8).

Posted by Dessert Survivor at 3:39 AM No comments:

I stopped doing alternating-character fonts at the end of 2020 when I ran out of ideas. Recently I thought that alternating bottom-heavy letters with top-heavy letters might be interesting. I based the letter shapes on a distorted oval or egg shape, with the stoke narrowing at the narrow end and widening at the wide end. After doing two sets of letters based on the shapes of upper-case letters (A & B), I added two more sets based on lower-case shapes (c & d). These four sets of letters are arranged to form six different fonts, four of which are spaced for alternating character sets (AB, Ad, Bc, & cd). In the picture below, the first two lines are of the two sets of letters that do not alternate, one with the top-heavy characters (Ac) and the second with the bottom-heavy characters (Bd). The other four alternate the four sets of characters. 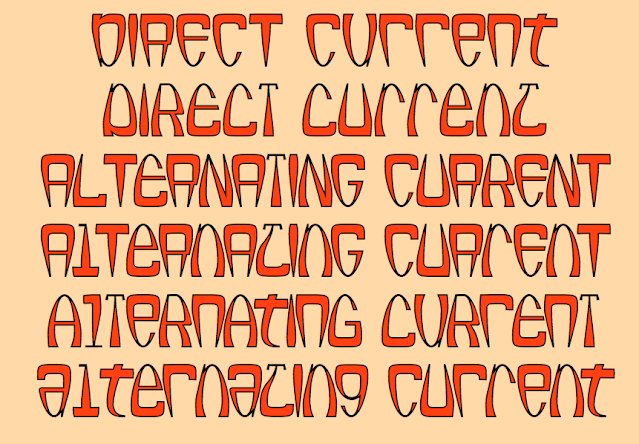 I considered doing outlined versions, but the narrow parts of the letters do not allow an interior. Instead I created an inset style for each of the six fonts that can be layered above the base font to create hollow or colored letters. They are shown in red in the picture above.

The result is a typeface family very different from any other that I am aware of. It is available at myfonts.com.

Posted by Dessert Survivor at 4:56 PM No comments:

I designed Myhota in 1990; it was one of my earliest designs. The bold version was first, and then a thinner version followed. It is a condensed font with a very high x-height that makes it work better as a display font than a text font. I have long thought an expansion with additional weights was desirable and I finally got around to doing it. The end result was a much bigger family than I originally anticipated, with a total of nine weights plus italics plus backslanted styles for all weights. 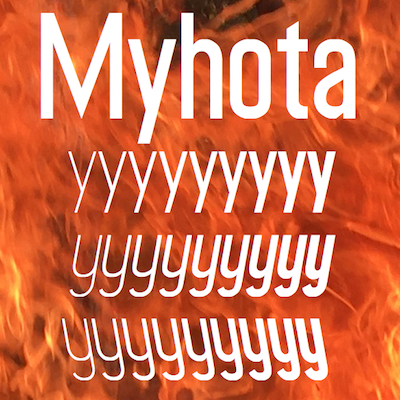 Because Myhota was not very useful for text, in the early 1990s I attempted to alter it by lowering its x-height and widening the letters to create something that would work as text. The result was MyhotaHatched. It also originally had two weights. In 2021 I added an intermediate weight and italics, giving the family 6 members.

Both are available from myfonts (here) and FontSpring (here and here).
Posted by Dessert Survivor at 9:10 PM No comments:

Introducing JetJane, a family of 36 faces, the biggest family currently in the IngrimayneType collections. 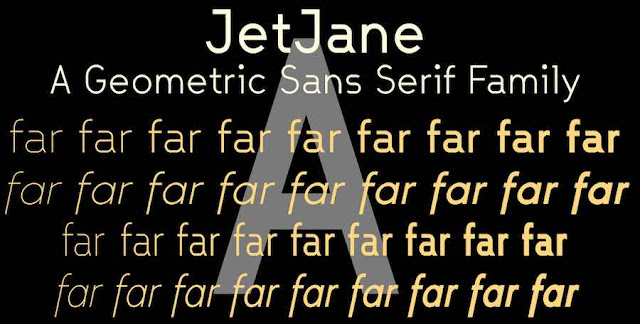 JetJane is a geometric sans-serif family. The family has two widths and each width has nine weights. Each of these 18 fonts comes with an accompanying italics version, giving the family a total of 36 members.
JetJane, like other geometric sans faces, is plain, unadorned, and highly legible. It is derived from JetJaneMono, a monospaced sans-serif face. This development is unusual because one expects the monospaced variants to be  created after the proportional variant, if a monospaced variant is even produced. This development history results in some distinctive differences between JetJane and two other geometric sans faces from IngrimayneType, AndrewAndreas and Yassitf. Below AndewAndreas is on top, JetJane in the middle, and Yassitf on the bottom. All are printed at the same point size. 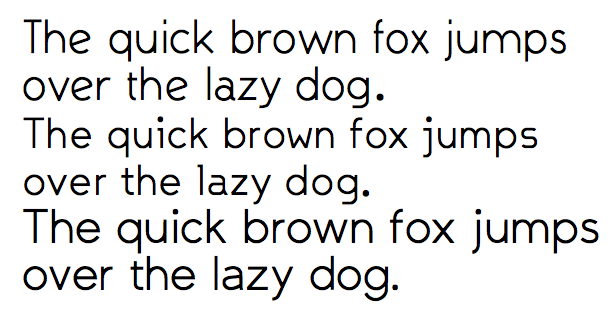 JetJane is available from myfonts.com and fontspring.com.
Posted by Dessert Survivor at 6:36 AM No comments:

One of the first novelty fonts I created was a font made of knives, spoons, and forks that I named Dinner. In the past few weeks I added three variants to make a family of four. One variant was composed only of forks, another only of spoons, and the third only of knives. Below the three new variants are illustrated above the orginal typeface. 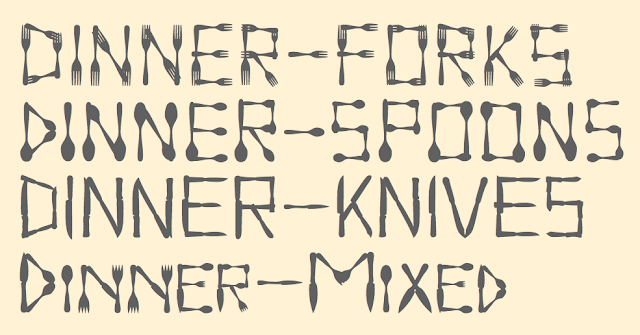 The orginal Dinner had small caps in the lower-case slots. The three new family members have alternative forms of the letters in those slots and that can be seen in the "N"s in the picture.
The revised Dinner family is available from Fontspring and MyFonts.
Posted by Dessert Survivor at 5:23 PM No comments:

JetJaneMono is a family of sans-serif faces that are monospaced. In May the family underwent a large expansion with the addition of condensed-width styles, Below the original width is show in the first line and the condensed width in the second.

Twelve new condensed styles were added to the family. The new fonts had three weights: thin, regular, and bold. Each upright style had a corresponding italics style. Each of those six new fonts had a similar new font with the lower-case letters replaced with small caps. The text below shows all twelve of the new styles, with a different style in each line. 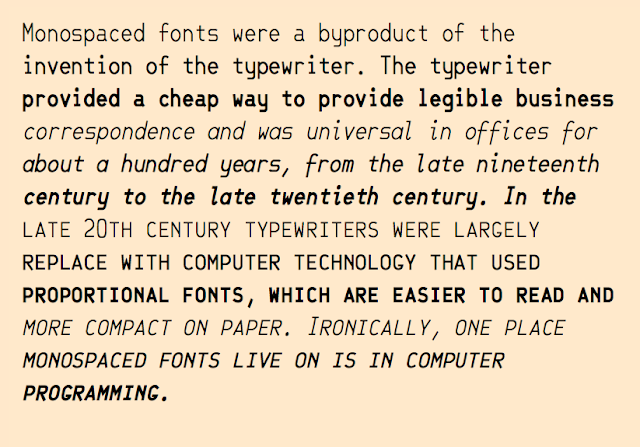 The revised and expanded JetJaneMono family is available at myfonts.com and fonstpring.com.
Posted by Dessert Survivor at 11:29 AM No comments: